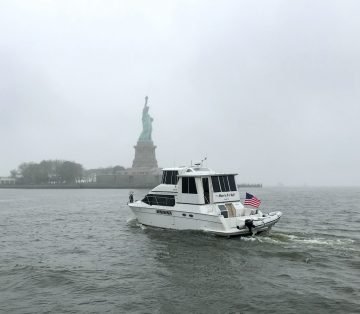 Sam and Rev Crouse created What Yacht To Do to show how you can be sitting in your living room one day and then living on the water the next. (You have to say “What Yacht To Do” with a Texas accent to get the full effect…“What ya ought to do”.)

The Crouses are, at this writing, about three months into their loop. They have a series of entertaining blogs and YouTube videos to document the trip, both the ups and the downs.

I was so excited to see that one of their first posts is titled “How we can leave home for a year”. Yes! This is exactly the treasure I look for in blogs.

Downsizing was one of the steps. They sold the Uptown Dallas brownstone and pretty much everything in it and moved to the small lake house, kind of.

The lake house was an hour out of town and Sam still worked as a pilot for American Airlines, so they rented a small apartment near DFW for a few months until he retired.

This step of getting out of the big house before they had to and renting a small apartment is innovative. I like the way they think. And living in a tiny apartment prepared them for living in a small space on the boat!

“We had never shared a bathroom or closet since getting married 20+ years ago so this tiny space took some getting used to.

I already had gathered a list of marriage counselors’ phone numbers. Just in case.”

Rev Crouse, “How we can leave home for a year” post

Financially, this step accelerated the savings they had started earlier and they were able to use a portion of the money to buy their boat.

In the post they discuss what they are doing about the cars, mail, home security, etc.

Interestingly, they also give a shout out to their financial planner, who was honest with them and told them what they needed to do to make this trip a reality.

I’ve been reading Great Loop blogs for at least nine years and I have never seen a mention of, much less a shout out to, a financial planner. This begs further investigation.

What was the honest advice he gave? How is it that he had such an impact that they mentioned him in their blog? Turns out the Crouse’s have used Paul as a trusted advisor for a number of years, even following him from a larger firm when he started his own. As the time came closer for the start the loop, Paul was able to confirm what their calculations told them, that they had enough assets to do the loop.

At about the three month mark of the trip, they had a “1000 miles on the Great Loop! Data, Stats, etc.” video, where Sam outlined some of the costs they’ve had. In it he straight-out emphasizes the point that Captain John makes over and over on his website: when you buy your boat, you lock in certain costs. That video has since been taken down, but this video of their boat makes a similar point. When you buy the boat, you lock in certain costs.

Sam and Rev went for comfort in their boat, buying a 50 footer, Here’s to Us.

A large boat makes marina costs higher than in a smaller boat, because you pay moorage by the foot.

They have stayed in more marinas than expected, because, well, air conditioning. I cannot fault them for that because, being from the Pacific Northwest, I am a wimp when it comes to heat. In a marina, you have plenty of electricity for air conditioning. Sam estimates $2-$2.5k per month at marinas for their 50 foot boat.

In a blog post in 2020, Sam went over the cost of fuel. Their boat gets about 1.1 miles per gallon. When you compare that to a car, it is inconceivable, but really, for a boat it’s about normal. We had a boat about half the size of theirs and it didn’t get much better mileage than that. He estimates $1.5-$1.7k per month for fuel.

I talked to a man once who did the loop on a boat just a bit smaller than Here’s to Us. He stated that when the loop was done, he figured it cost him $50,000 more than if he’d stayed at home. Sam and Rev have budgeted a similar amount for their fuel, marinas, and maintenance.

How do they pay for their cruising costs? A combination of their retirement income and the cruising operating fund they saved up.

When the loop is over they plan to sell the boat, hopefully for something close to what they paid for it. They have updated the electronics and added storage.

I think their videos and blog will help in the sale. There must be someone a few months away from wanting a boat just like theirs!

I was curious if they are planning to monetize their many videos and blog posts. I hope so! Video editing takes a of effort and is such a gift to us. The videos are well-curated with good and entertaining content. Really, they are so fun to watch!  Even though they are just three months into the cruise, some of the videos have over 3000 views.

Sam and Rev started the YouTube channel and the blog to keep track of their travels, without realizing the widespread interest they would generate. However, if they get 1000 YouTube subscriptions, they can start getting a little income from them. As of this writing, they are at 613, so come on everybody, help a fellow looper, hit the subscribe button on “What Yacht to Do”!