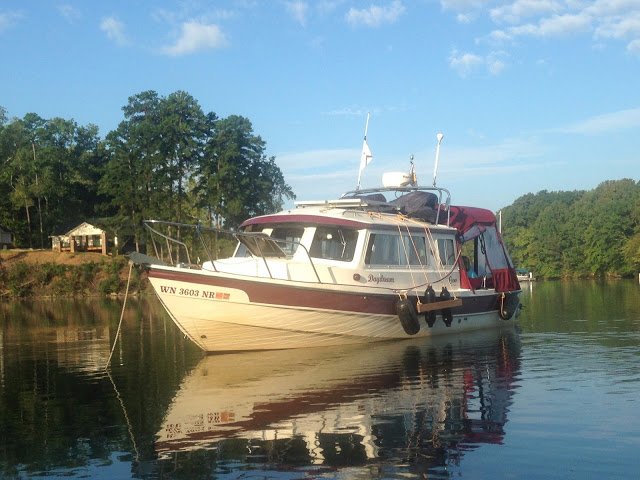 One strategy to do America’s Great Loop is to use the boat you already own.

In 2009 I followed a blog of a couple who cast off their lines from their Atlantic Intracoastal Waterway home to do the loop on their 26 foot Glacier Bay Catamaran. I watched with fascination as it seemed like such a small boat to live on for the better part of the year. At one point, when someone asked them why they chose that boat, they answered, “It is the one we had.”

Pat and Patty Anderson did one better than that.

In 2017, they towed their 2005 25 foot C Dory, Daydream, all the way from Blaine, Washington, just below the Canadian border,  to the Okeechobee Waterway in Florida with their Silverado. That is about as far as you can go within the contiguous 48 states. From the top left corner to the bottom right. They parked the truck and trailer in Florida for the duration.

Our choice of boat for the Loop is dictated by the fact that we own our 2005 C-Dory 25 Cruiser, Daydream, free and clear, so we have no need to buy a boat or factor that into our costs. It is a great boat, and it meets Capt. John’s tests, at least for us:

“The kind of boat you choose for making this voyage must be no smaller than one
you can live comfortably on. It should also be no larger than one can safely handle alone.”

And they spent 8 months living in that small boat, with their Lhasa Apso, Baxter, and cat, Lucy.

The size of our boat was not a handicap but a benefit on the Loop. Daydream was big enough that we had everything we needed and were comfortable, and small enough that both Patty and I could handle her safely. It allowed us to go under many bridges without waiting for an opening, and the shallow draft allowed us to go into many places larger boats could not go.

There are three financial “moral to the story” points we can tease out of this tale.

Point One. Using the boat you already own free and clear is a huge financial benefit.

Contrast this with having to come up with a plan to pay for the purchase of your Great Loop boat, and you can see what a benefit it is not to have a large financial outlay at the beginning of the loop.

It’s not that the Anderson’s had a cheap boat.  No, they bought their boat brand new 12 years earlier, but because they used the boat they already had they were able to make the Great Loop just another of their many boating adventures.

(A non-financial benefit to using the boat you already own: you’re already a pro at running the boat and docking! No learning the ropes with witnesses to view your mistakes.)

The second financial benefit is having a trailerable boat small enough to tow with your own truck, especially when you live 2000 miles from the loop!  The contrasting scenario is paying a boat-hauler tens of thousands of dollars to get your boat across the country…and then home again. That’s a financial burden the Andersons avoided because of their trailerable boat.

The third financial moral of the story is related to the second: size of boat. A smaller boat incurs lower boat-related costs on the Great Loop. Less fuel. Lower moorage costs.

Daydream has a Honda 150HP outboard motor that is capable of going fast, but Pat and Patty took the loop pretty slow, so as to conserve gas.

It appears to have worked, as in his final post, Pat reports that they travelled 5428 statute miles and consumed 1114 gallons of fuel.  That’s 4.8 mpg, which is very good for a power boat. His early posts indicated he usually got 3.4ish mpg at home. Maybe it was the downstream rivers which helped.

Another unusual statistic. 226 days on the loop, only 82 nights in marinas. That is quite frugal. It is also quite unusual, especially for someone travelling with a dog.

(Their blog describes the constant search for appropriate and available places to beach the kayak so Baxter could do his business! They had to be on gator watch in the southern rivers.)

I followed Pat and Patty’s blog while they cruised in 2017.

It was one of the scrolling blogs on the AGLCA site and I happened to click on it.

When I saw they were from Washington State, it piqued my interest to start reading. Since Lance and I are also from Washington, we have the dilemma of distance to deal with.

Then, when I saw they were on a 25′ boat, it REALLY piqued my interest and I wanted to read it just to see how in the world they did it!

Our boat, Prequel, was a couple of feet longer than theirs, so when we were on a two-week San Juan Island cruise the summer of 2017, I was considering whether it would be do-able for us for a long trip. We decided, no, since Lance is 6’5” with his shoes on, and it was just too hard on his back to never be able to stand upright. We’ll likely buy a bigger boat in the east when it comes time for our loop.

Pat and Patty have some of the best, well documented PLANNING posts. In their first few posts, Pat lays out what equipment, gear, systems and more they have on the boat.

And then, at the END of the trip, Pat goes through a thorough analysis of what they are glad they brought along and what they could have done without. Very valuable information.

They describe some of the modifications they’ve made to the boat. In fact, it may be the description of their one burner induction stove top that started us thinking about the one we bought a few months later!

Take a look at their blog and enjoy their trip on their own, paid-for boat.