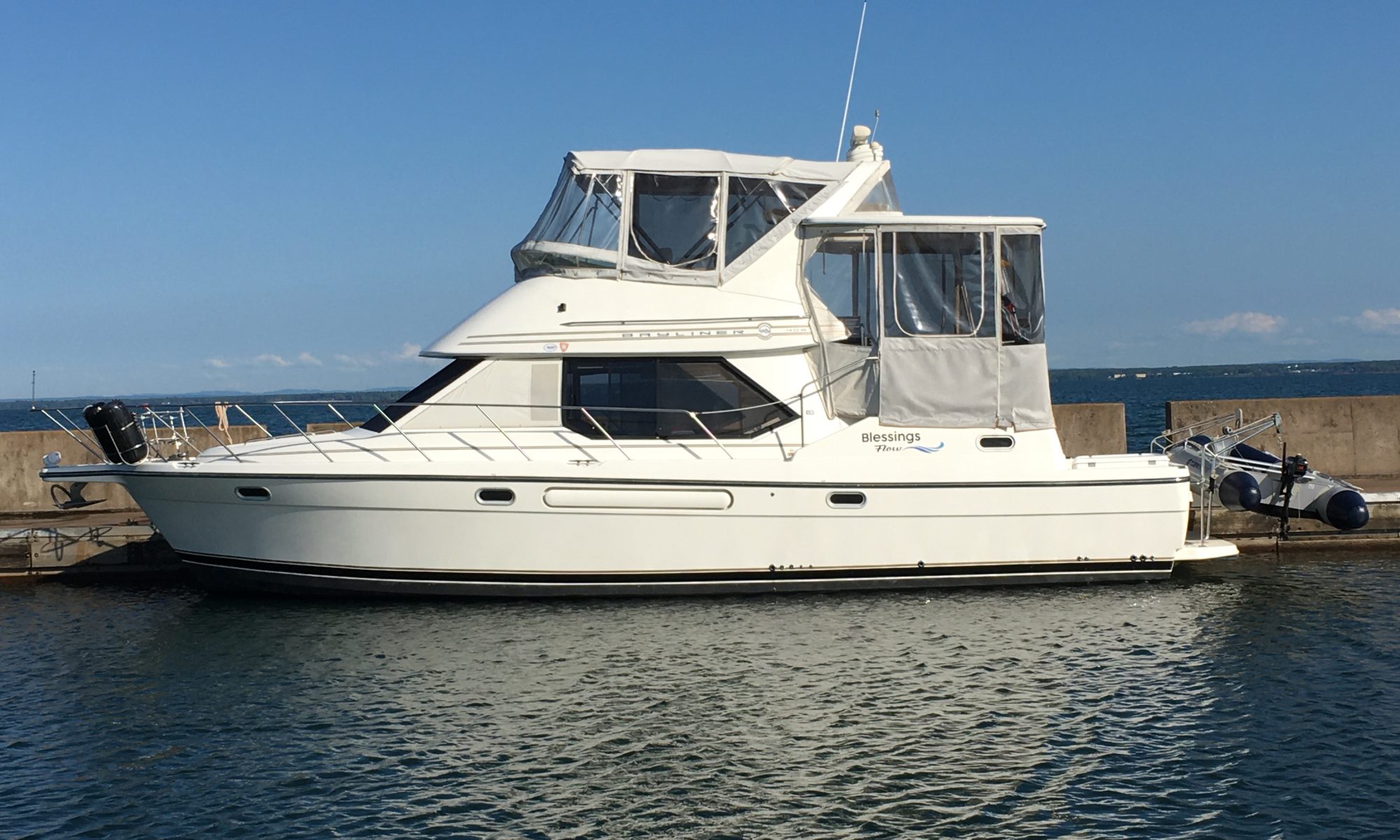 As our retirement is here and we say goodbye, we’ve had a lot of questions from friends about our plans. I thought it would be good to write a post to answer some of the questions. You may have heard a bit here or there, so this blog post is to give an overall picture of what we hope to do in the next couple of years and to clear up a couple of misconceptions.

Yes. There is a boat involved.

No. It is not a sailboat. It is a 40’ Bayliner 4087, a powerboat. Picture a 40’ RV and you get the idea of the kind of living space involved. We’ve named it “Blessings Flow”. (As in “Praise God from whom all Blessings Flow”.)

No. We are not sailing around the world! There is a route around the eastern US/Canada called America’s Great Loop. You can cruise ~6000 miles and make a loop. There are usually a couple hundred boats doing it at any given time.

Here’s a description. Picture starting on the east coast of Florida. You can travel north on the Intracoastal Waterway (ICW) all the way to the Chesapeake Bay. The ICW is a connected series of rivers, bays, lakes and canals and you never have to go out into the Atlantic.

You cruise up the Chesapeake, then down the Delaware River to the tip of New Jersey. You do have to go out into the Atlantic along the New Jersey coast, but only as far as New York City, where you enter the Hudson River.

You travel north on the Hudson until the Erie Canal. Part way through the Erie Canal, you take a turn on the Oswego Canal and come out in Lake Ontario. Cross Lake Ontario and you enter the Canadian Trent-Severn canal system, which drops you out in Georgian Bay, a part of Lake Huron. Continue in Lake Huron through Canada’s North Channel and come out near the tip of the mitten in Michigan.

Cross under the Mackinaw Bridge and you are in Lake Michigan. You make your way down Lake Michigan and enter the river system near Chicago.

You cruise in a southerly direction on the Illinois, Mississippi, Ohio, Tennessee, Tombigbee and other rivers and come out at Mobile, Alabama in the Gulf of Mexico. Going south on the rivers lets you take advantage of the currents.

Once you are in the Gulf, you can get back to Florida and voila, you’ve completed a loop.

There are side trips of course. Nashville, Washington DC, the Bahamas, and more.

It takes about a year to do “the Loop” following the seasons: up the ICW in the spring, in the north during the summer, down the rivers in the fall, winter in the warm south. You don’t want to be in the south during hurricane season and you cannot boat in the north during winter.

Since it is not easy to get a boat from Seattle to the waterways of the loop, we looked for a boat back east. We found our boat in Wisconsin, on Lake Superior.

Once the ice melts, by early summer 2023, we plan to take the boat east on Lake Superior, go through the locks at Sault Ste Marie, and spend the rest of the summer in Canadian waters. In the fall, we’ll head south down the east coast to someplace warm for winter. Then in spring of 2024, we’ll head north again and do the entire loop as I described it above. This timing has us finishing the loop the winter of 2024/25.

You notice we’ll be going through the Chesapeake twice, so we hope to see some DC based colleagues while we’re in the area.

All plans with boating are fluid. So, stay tuned to see how it actually turns out! There are plenty of places to dock the boat for a spell if we need to fly home for whatever reason.

2 Replies to “Retirement is here! Now what?”

As an accountant with an interest in personal finance and financial independence, I’m always curious how individual loopers make the dream happen. We’ve had fun exploring Looper planning stories (Spotlight Backstories). You can read about OUR planning story and how our loop is getting closer all the time in the MV Blessings Flow tab. Enjoy!