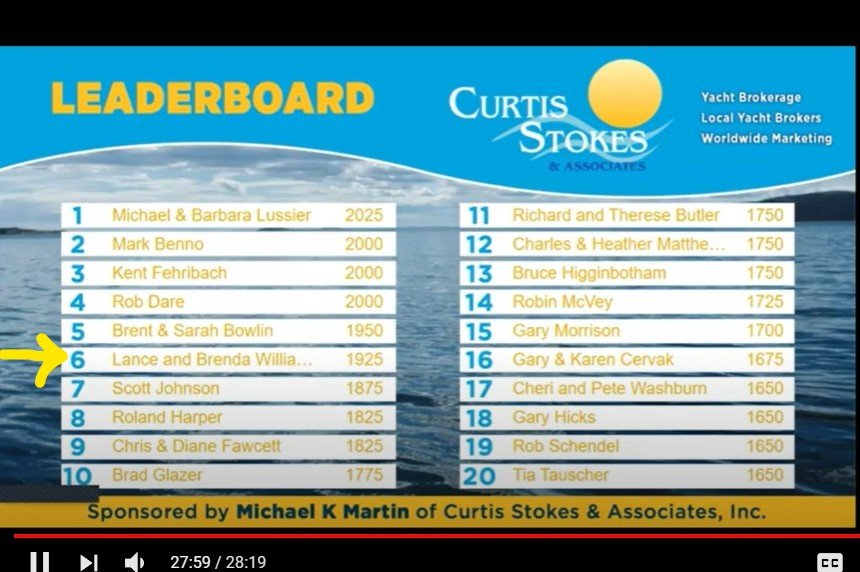 Planning is half the fun, they say. Based on how fun the planning half has been, the actual Loop itself should be a blast!

I’ve run across a couple great Great Loop planning blog posts lately that have really inspired me. These are people on the loop already, but who have taken the time to describe some of their planning.  I need to reach out and see if the bloggers would like to add to my collection of planning stories here at greatloopfi.

Speaking of planning, we have been going a bit deeper in our planning lately.

After several years of watching AGLCA Rendezvous come and go, we determined that 2020 would be the year we would set aside the time, fly across the country and take the plunge into the looping community. It was our 2019 Christmas presents to ourselves!

In early February 2020 we signed up for the AGLCA Spring Rendezvous in Norfolk, VA.  We paid the registration fee, bought our plane tickets, and made the hotel reservations, never dreaming that the 2019 version of the SARS virus roaming around Asia would impact our own country so much. After all we’d seen such viruses come and go in the past with no impact on us. By late February, the virus made it to Europe and within the first couple of weeks of March it was clear the US was not going to escape this one…but surely, by May, when the rendezvous was scheduled, we’d be through this, right? Ha!

At the end of the day, our registration fee and hotel nights were refunded, but the airline tickets didn’t come in the cash-back version. What to do with the credits? More about that later.

The AGLCA put on several series of webinars covering the material that would have been covered at the Spring Rendezvous. We gladly subscribed and enjoyed the virtual trip from home.

Then came the time for the Fall Rendezvous, generally held at Joe Wheeler State Park in Rogersville, AL near where Loopers would be on the seasonal trip in a normal year. The locks on the Illinois River were closed from mid-summer until late October, so this was going to be an unusual year for the rendezvous, anyway. Then, Covid just added to the weirdness causing the event to go entirely virtual.

AGLCA did an AWESOME job of putting on the virtual Fall Rendezvous. In addition to excellent route content, Kim Russo and the Home Crew found really innovative ways for participants to meet one another.

On one night, we were broken into groups (breakout rooms) of 20 something and everyone had 2 minutes to introduce themselves. It was great to put faces to names that I read on FaceBook and the AGLCA forum every day.

On another day, we were broken into groups according to some commonalities. Lance and I were put into a group of Bayliner owners…4550, 4588, and 4788 owners, to be precise. We went into the evening pretty firmly sold on the Bayliner 4087, but came out seriously considering the larger pilot-house boats. (Notice the 4588 in the boat fund tracker!) This was a group of only 5 couples, so we had some quality time together.

For the last meet-up opportunity, we had what I can only call speed-dating. We were on a platform that connected us to another participant/s for 4 minutes exactly for some one-on-one time. It was fun. You never knew who the computer would pair you with. We had a page full of notes on the people we met by the time we were through.

Then there was the trivia game! Despite some bonehead wrong answers because I didn’t read all the potential answers before clicking one, we ended up sixth on the leader board! I *think* there were 150 participants. Not too shabby!

At the rendezvous, the various AGLCA sponsors had Lunch & Learn sessions where they could talk about their products. We especially appreciated the Waterway Guide session, as we had no clue about all the free online resources before he demonstrated them, and the Ask Captain Chris session with Chris and Alyse Caldwell, where they gave useful tips and reminded us of their available services.

We decided, after years of watching many opportunities of Captain Chris’s hands-on classes come and go, that 2021 would be the year we would set aside the time, fly across the country, and take the plunge into Introduction to Boat Systems. It is our 2020 Christmas present to ourselves!  After all, we had all those flight credits to redeem. Who knows how long they would last!

So here we sit, six weeks before our trip, flights purchased, hotel reservations made, KN-95 masks in hand, hoping we can keep ourselves Covid-free before it is time to get on the airplane, and REALLY hoping Chris and Alyse don’t get it and have to cancel the class. (Lord, hear our prayer!)

It really doesn’t make sense to fly ALL the way across the country for a two-day event. So, we’ll be taking a week-long road trip loop from Orlando through south central Florida to see some looper sights on the Gulf Coast near Fort Myers, maybe a dolphin or two and a gulf coast sunset. Then we’ll drive across the state by way of Lake Okeechobee, stopping in to see a lock and marina or two. We’ll end up on the Atlantic side where it’s the sunrises that impress. Then up to Vero Beach for the two-day Boat Systems class before heading back to Orlando for the flight home to Seattle.

See! If this planning is only half the fun, the real thing is bound to be outstanding!