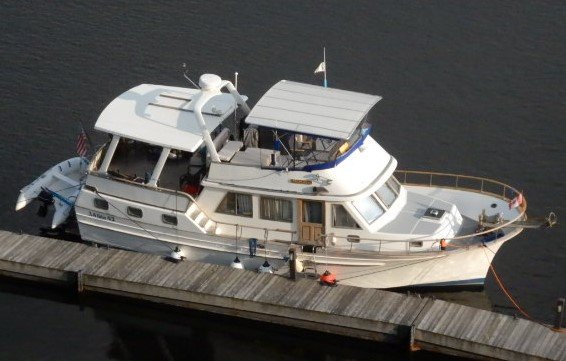 I’ve seen a lot of interest lately in the concept of looping in segments. That is, taking more than one year to do the loop. Why would someone decide to do it that way?  What are the benefits?

Lance and I have discussed an itinerary which would include storing the boat for a winter somewhere in northern New York after exploring Lake Champlain, the Rideau Canal, and the Thousand Islands. This would give us time to enjoy the area while putting us in a good position to enter the Trent Severn as soon as it opens the next year and then take our time in North Channel and Georgian Bay.

Naturally, I keep an eye out for mention of Loopers who winter their boats in New York.

AGLCA member Charles Williamson’s forum comments about where he stored his trawler for the winter(s) caught my attention: New York and Ontario over two consecutive winters.

Two winters in the north? That is intriguing!

I reached out to see what the story is and why.

It turns out Charles and Jane are taking their time around the loop to see all they can the first time around. They only plan on doing the trip once, so they are being deliberate about their route and timing.

“We firmly believe it isn’t the destination, but the trip, so we have taken side trips or spent additional time in a location to ‘flesh out’ our trip.”

This slow looping has meshed well with other interests and responsibilities in their lives. They want to be with family over the holidays, and until recently Jane was doing some IT consulting work for her former employer. She did her work over the winter and the company did the testing while she was out cruising. A win-win situation! Now she has time to connect with her grandchildren and do grandma duty in the off-season.

They have been at this a while.

They started their journey exploring the Chesapeake in 2016. They were at their home port near Philadelphia that winter.

Then up to Lake Champlain, where Jane was able to touch base with some of her Vermont relatives, before heading down the Erie Canal. They cruised past the turn off to the Oswego canal that most loopers take. Instead, they continued westward to the Cayuga and Seneca Canal which took them to Lake Cayuga, one of the Finger Lakes, where they stopped for the year. That was 2017.

2018 saw them cruising the Thousand Islands and the Trent Severn. They stored for the winter in Penetanguishene, Ontario, right at the exit of the Trent Severn waterway.

This past summer, in 2019, they made their way through Georgian Bay, North Channel, back to the US, down Lake Michigan and through the rivers as far as Kentucky Lake, where the boat is stored this winter.

Plans for the future include cruising to Nashville and Chattanooga before heading down to the Gulf, around Florida, and up to North Carolina.

The way I count it, that’s four years so far and likely another two, maybe three, to go.

Let’s look at this from a financial perspective.

While I’ve never seen anyone cite finances as the reason for doing a loop in segments, the slow approach has implications on cash flows.

Consider the two buckets of costs in cruising: purchase of the boat and the cruising kitty (e.g. operations, improvement, and repairs).

The cost of the boat doesn’t change if you loop in segments, but the yearly cruising kitty costs sure do.

Same with moorage. The cost to spend a few months on the hard, in storage, is less than paying transient moorage for those nights.

I think this is useful food for thought.

Let’s face it. Cruising is always going to be more expensive than staying home. (Interestingly, Charles disagrees with this statement, but I think that’s a discussion for a different post.) If there is a way to spread that expense over time, it is worth considering. If I’m planning how much we’re going to need to take from savings each year, this segment approach to looping could avoid drastic withdrawals all at one time.

One thing I’ve learned through discussions with Charles and with other loopers is how valuable it is to have real estate in your portfolio. Especially paid-for real estate.

Charles and Jane bought a reasonably priced trawler in 2010 when the global recession had boat prices lower than they are now.  The Albin 43 was a gently used, one-owner boat which he had searched 5 years or more for. He kicked a lot of proverbial tires before finding this boat.

To pay for it, they tapped into equity they had in a paid-for rental property. Now the tenants are cash-flowing those boat payments.

“One of the things we did with our rental, was to turn it over to a management company. They have kept it rented and we cruise. They even deposit our money and the payments are taken automatically from that account. Pretty easy.”

Another story that warms my heart is what Charles shared about cruising from an emotional, relationship perspective.

Jane was not a boater. When Charles first started talking about the trip and buying a boat, Jane said she would join him…via vehicle means, wherever he decided to stop. However, they both now agree that the purchase of the boat has been one of the best purchases for their relationship.

“I don’t know if it is due to the closeness of the boat confines, and living that way for extended periods of time or that we are always working together or even that Jane is happy with my choice of retirement, but we are much closer in our relationship while aboard.”

And that, my friends, is priceless!